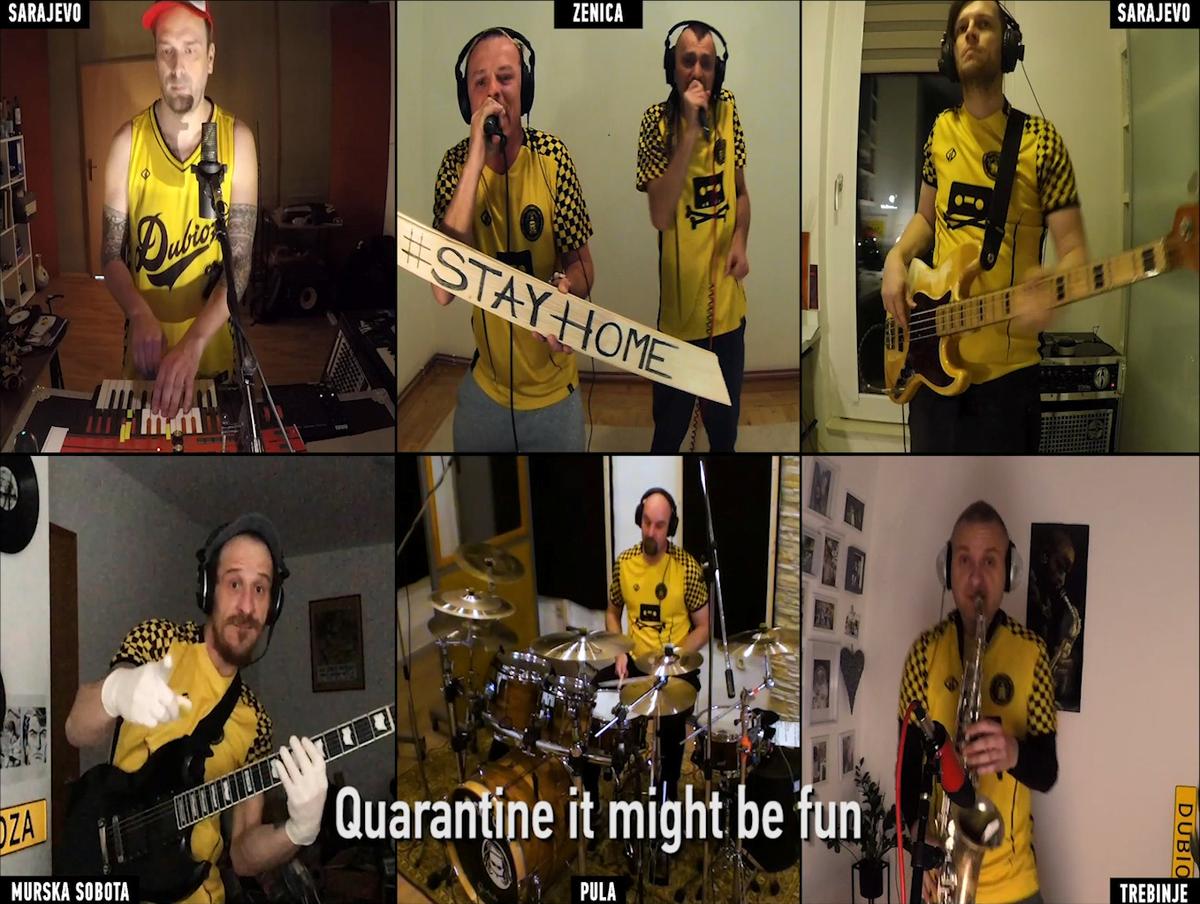 SARAJEVO (Reuters) – Bosnia’s most popular band, Dubioza Kolektiv, invites its audience to “stay connected and disinfected” during a weekly “Quarantine Show” online to cheer up fans locked in their homes due to the coronavirus.

Bosnian band Dubioza Kolektiv cheers up its fans across Europe with their weekly online concert “Quarantine Show”, held under slogan “Stay connected and disinfected”, Bosnia and Herzegovina April 7, 2020 in this screenshot taken from a video. Dubioza Kolektiv/Handout via REUTERS

Bosnia, like most states in Europe, has introduced lockdown in an attempt to halt the spread of the novel coronavirus which has so far infected close to 800 people and caused 30 deaths in the Balkan country.

Each Monday at 20:30 (18:30 GMT), tens of thousands of people watch the dub rock group perform online, with the musicians playing from their homes in three different countries.

“The internet has remained the only way for us to communicate and play music,” Dubioza Kolektiv keyboardist Brano Jakupovic told Reuters speaking via Skype from his home in Sarajevo.

“It is important that people enjoy the concert but also that they communicate via chats, write to each other and feel for the moment the same way as they felt before corona,” Jakupovic said.

The musicians play from their homes in Bosnia, Croatia and Slovenia but their act is perfectly synchronised.

Jakupovic says that about 30,000-40,000 fans from dozens of countries worldwide watch the concert live online. “It’s very exciting, and it all happens while playing from our own bedrooms,” he said, laughing.

Dubioza Kolektiv is known for their eclectic musical style and socially and politically engaged lyrics sung in Bosnian and English.

Their first quarantine show on YouTube three weeks ago had almost 200,000 views and about 1,000 comments and cheers.

“This is perhaps one of rare moments when the situation is the same on the whole planet,” Jakupovic said. “One microscopic organism is capable of bringing us to a point where all of us are the same, while we are not capable of doing that ourselves.”