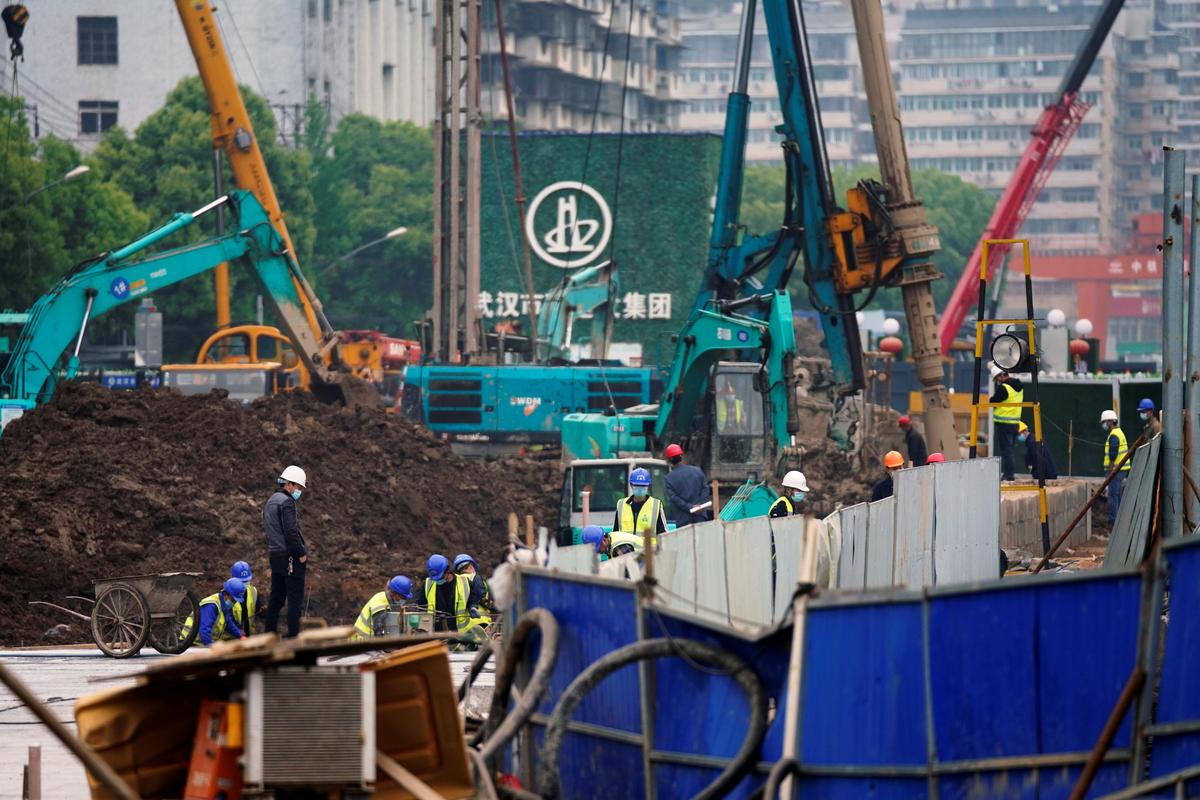 WUHAN, China (Reuters) – China’s Wuhan city, where the global coronavirus pandemic began, is still testing residents regularly despite relaxing its tough two-month lockdown, with the country wary of a rebound in cases even as it sets its sights on normalising the economy.

Workers wearing face masks are seen on a construction site after the lockdown was lifted in Wuhan, the capital of Hubei province and China’s epicentre of the novel coronavirus disease (COVID-19) outbreak, April 10, 2020. REUTERS/Aly Song

Concerns remain over an influx of infected patients from overseas as well as China’s ability to detect asymptomatic patients, and the government in Wuhan has tried to reassure the public that it remains vigilant.

Feng Jing, who runs a group of community workers looking after the Tanhualin neighbourhood in Wuhan, said during a government-run tour for journalists on Friday that they would continue to carry out extensive checks on residents.

“We carry out comprehensive health checks everyday and keep detailed records of their health condition,” she said, adding that there is no likelihood of asymptomatic cases in her community.

“Currently our neighbourhood is an epidemic-free community – it’s been 45 days so far, so we don’t have this situation,” she said.

China reported a fall in new coronavirus cases on Friday after leaders promised to accelerate the country’s economic recovery, boost domestic demand and put more people back to work.

The country reported 42 new cases on Thursday, down from 63 a day earlier. Of the daily total, 38 were imported, down from 61 on Wednesday.

China’s central government coronavirus taskforce chaired by Premier Li Keqiang said on Thursday that they would speed up efforts to revive the economy while at the same time introducing targeted measures aimed at preventing infected people from crossing the country’s border.

It said China now needed to “actively create favourable conditions” to restore normality in the economy, though it warned there was still a risk of a rebound in cases.

In Shanghai, state media have also been deployed to dispel online rumours that the city has now become “the most dangerous place in the country” as thousands of people flood in from Wuhan, including many asymptomatic and recovered patients.

With the government now promising to deploy resources to tackle high-risk areas, much of the focus has shifted to Heilongjiang, which reported 28 new imported cases crossing the border from Russia on Thursday. The province has so far found 154 cases of imported infections.

The virus, which first broke out in Wuhan in late 2019, has since spread around the world infecting more than 1.4 million people, killing more than 87,700.

Officials in Wuhan said on Friday the city will spend 200 million yuan ($28.4 million) to upgrade the city’s 425 farmers’ markets, as part of a campaign to improve hygiene.

Several of the early cases of Covid-19 were linked to a seafood market in Wuhan that also sold other species, suggesting that the new virus may have jumped from an animal traded there to people.

“Once reopened, the farmers markets should ensure no trade in wild animals and no trade in live poultry,” Hong Zhihua, vice director of Hubei’s Patriotic Health Campaign Committee Office, told a press briefing.

Liu Qingxiang, vice director at Wuhan’s health commission, said infrastructure in the markets would be improved and become more similar to supermarkets.

The pandemic has wreaked havoc on the global economy as governments imposed lockdowns to rein in its spread.

(This story corrects quote from Hubei official in paragraph 15 to say live poultry, not live animals.)