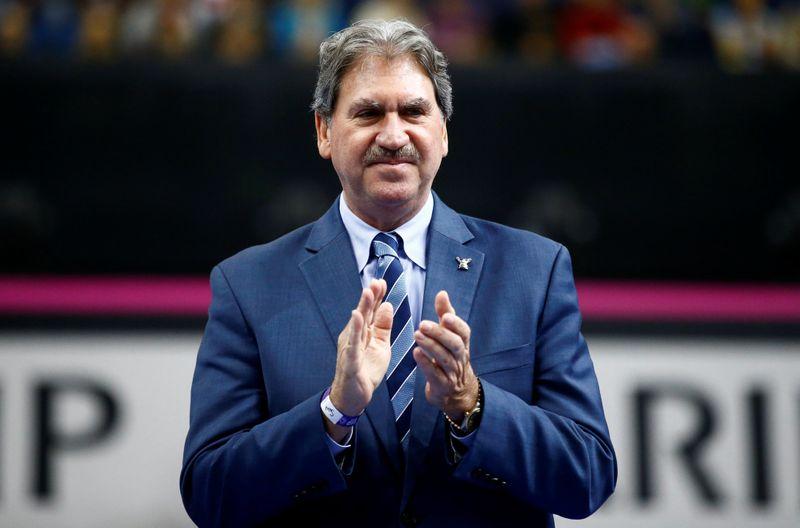 MUMBAI (Reuters) – The International Tennis Federation (ITF) is looking at ways to help those most severely affected by the sport’s shutdown due to the coronavirus pandemic and advises players to claim government support where possible, its chief David Haggerty told Reuters.

The tennis season was halted in early March due to the pandemic, leaving players in the lower tiers who rely on tournament winnings without the opportunity to earn a living.

The men’s ATP Tour and the WTA, which runs the women’s circuit, suspended all tournaments until mid-July after countries started locking down to contain the spread of the flu-like virus.

Last week the grasscourt Grand Slam at Wimbledon was scrapped for the first time since World War Two while the French Open has been rearranged from May to September due to the pandemic.

The ITF, which is the world governing body of the sport and oversees the Fed Cup and Davis Cup along with a number of lower-level tournaments, has taken a similar approach.

“The ITF, ATP, WTA and Grand Slams have had ongoing discussions during the suspension of play and realise the impact that this is having on not only players but other stakeholders such as nations, tournaments, officials, coaches and spectators,” ITF President Haggerty said in an interview.

“We are continuing our discussions to find feasible ways to assist these groups now and when we return to tennis. We would also encourage players to access official government support as a freelance/single employee company in their own countries where possible.”

Many others have joined her to voice their concerns about the financial hardships players are facing during the shutdown.

The London-based ITF has had to postpone 900 tournaments across all its circuits because of the virus and has put half its staff on furlough.

Haggerty said the ITF is not taking registration fees for players, has made resources on its academy platform free and suspended subscriptions for member nations until play resumes.

“Nobody is able to predict how long the sport will be impacted by the COVID-19 pandemic but we are working hard to maintain the infrastructure of tennis as a global sport and preserve earning opportunities when it is safe to do so,” said the 62-year-old.

“Earlier this week I was part of a call with White House Economic Council Director Larry Kudlow with some fellow tennis stakeholders getting the view of the return to sports, and how tennis will resume.

“The experts have ideas but there are still many details to be worked out about when it is safe for sport, and specifically tennis, to return.”

Haggerty said his organisation had to face significant financial impact due to the crisis.

The ITF saw the inaugural edition of its flagship women’s multi-nation Fed Cup finals, scheduled to take place from April 14-19 in Budapest, postponed.

He remained hopeful of finding a suitable alternative date for the tournament.

“The Finals were shaping up to be a fantastic spectacle for players and fans so we were obviously very disappointed that it couldn’t go ahead this month as planned,” he said.

“Approximately half of the first half of the year’s activity was postponed, accounting for about 50% of the income in the first six months.

“It’s vital we continue to support our 210 member nations so that the sport is in a strong position to resume as soon as it is safe to do so.

“There’s no doubting the magnitude of this challenge but if we work together and make the right decisions, we will get through it.”