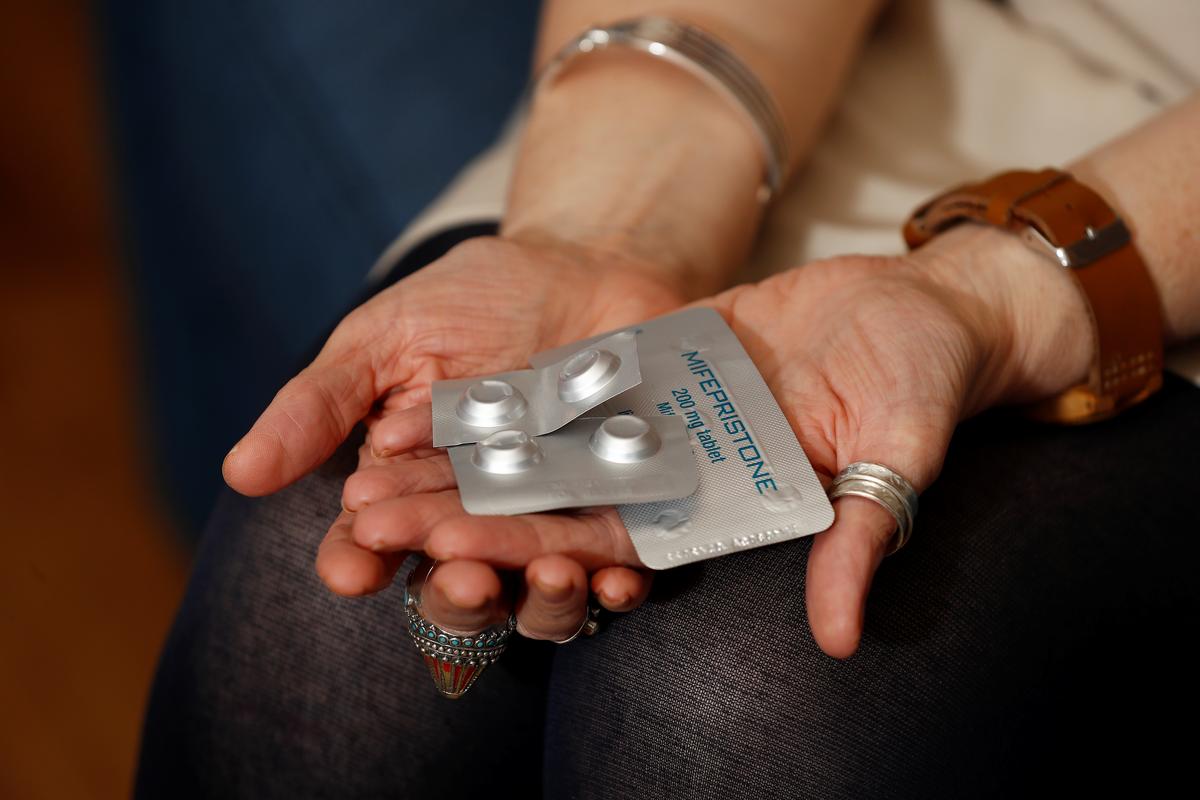 BELFAST (Reuters) – Britain’s leading provider of abortions said it will offer abortion pills to women in Northern Ireland by post to avoid them having to travel to England by ferry now that the coronavirus pandemic has closed air traffic.

FILE PHOTO: Naomi Connor, Co-Convener of Alliance for Choice poses with the recommended and safe medication that women in Northern Ireland are being denied. Belfast, Northern Ireland, April 7, 2020. REUTERS/Jason Cairnduff

Although abortion was decriminalised in Northern Ireland last year, it remains unavailable in the British region after the local health ministry missed an April 1 deadline to begin providing terminations.

That left the British government’s Northern Ireland Office advising women to travel to England for an abortion even though there were no flights, leaving women facing an 8-hour ferry journey from Belfast to Liverpool.

“We can no longer stand back and watch this shameful political gameplay with women’s health at a time of national crisis,” Ann Furedi, Chief Executive of the British Pregnancy Advisory Service (BPAS), said in a statement.

“We will no longer be complicit in government policy of booking bleeding, vomiting women on interminable ferry journeys, putting their health at serious risk,” she said.

The British parliament last year bypassed opposition from socially conservative Christian politicians in Belfast to bring Northern Ireland into line with the rest of the United Kingdom, where abortion has been legal for decades, but local politicians have stalled, activists say.

Some local charities have been trying to source abortion pills and offering telephone consultations with doctors abroad.

But the BPAS, which books abortions for Northern Irish women in England, has far more resources to offer the service.

BPAS added it had been informed about two women attempting suicide because they could not access abortion care in Northern Ireland.

It said that under Northern Irish law it was only legally permitted to provide abortion for the purpose of preventing grave, permanent injury to the woman’s physical or mental health.

On Thursday, the health committee of Northern Ireland’s regional parliament agreed to write to the Health Minister Robin Swann asking him to put in place abortion services.

“I thank BPAS for stepping up where others failed the women of Northern Ireland,” Paula Bradshaw, a member of the nine-person committee from the Alliance Party, said on Twitter.

However it said the timescale for addressing the necessary administrative and funding approvals required to introduce the service had been impacted by the coronavirus and urgent need to prepare the health and social care system for a surge in cases.

Some activists and lawmakers say the Health Department has had months to prepare and that many doctors, including members of the Doctors for Choice group, have said they are ready to provide care.