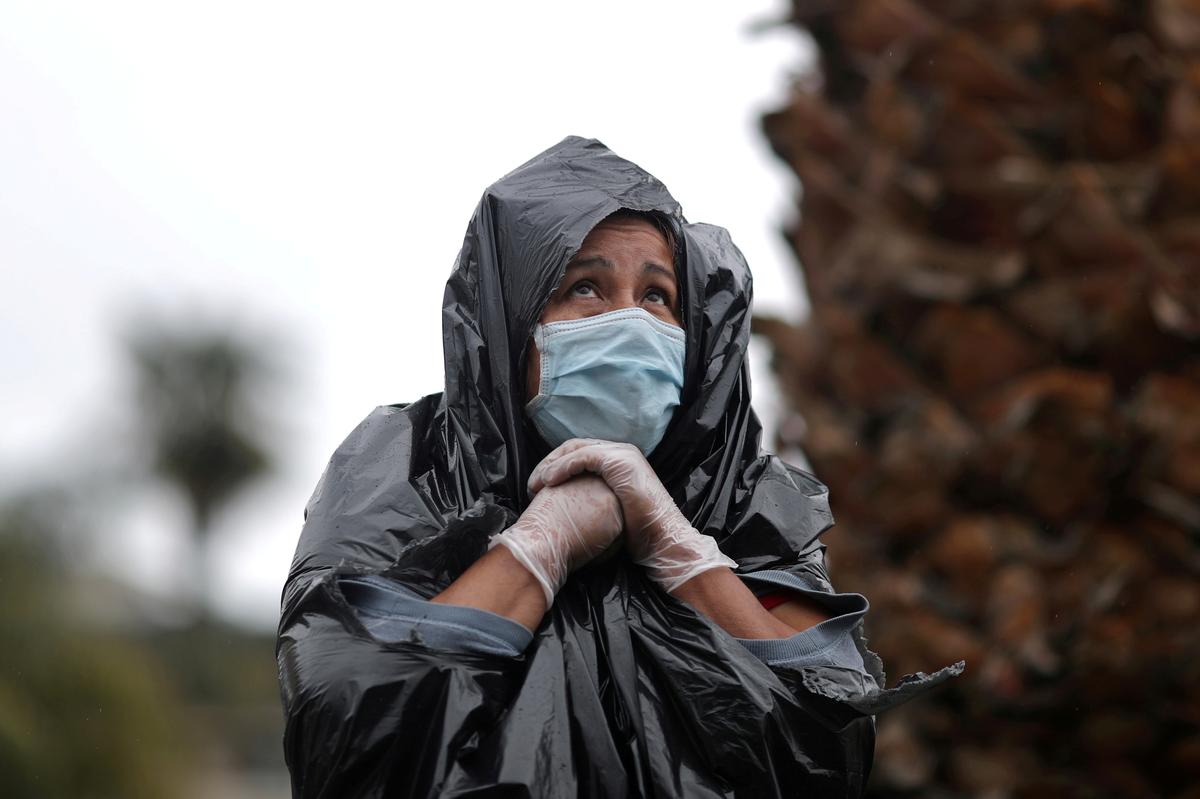 VAN NUYS, Calif. (Reuters) – A pop-up food pantry in Southern California on Thursday drew so many people that the line of cars waiting for free groceries stretched about a mile (1.6 km), a haunting sign of how the coronavirus pandemic has hurt the working poor.

Juana Gomez, 50, who said she can’t afford rent and food for her six children after her husband lost his construction job, stands in the rain in a line to pick up fresh food at a Los Angeles Regional Food Bank giveaway of 2,000 boxes of groceries, as the spread of the coronavirus disease (COVID-19) continues, in Los Angeles, California, U.S., April 9, 2020. REUTERS/Lucy Nicholson TPX IMAGES OF THE DAY

Hundreds of other people, many wearing trash bags to shelter from the rain, arrived at the one-day grocery giveaway on foot, forming a blocks-long queue in Van Nuys, in the central San Fernando Valley region of Los Angeles.

Organizers said they had enough groceries to hand out to more than 2,500 families, with each receiving a 36-pound (16-kg) box of rice, lentils and other staples as well as frozen chicken, oranges and other foods.

“I have six kids and it’s difficult to eat. My husband was working in construction but now we can’t pay the rent,” said Juana Gomez, 50, of North Hollywood, as she waited for her turn.

The COVID-19 pandemic has shut down nonessential businesses across the United States, with more than 90% of Americans under some kind of stay-at-home order, depriving millions of a paycheck.

The northeast part of Los Angeles, home to many working poor Latino families, has been especially hard hit.

LA Regional Food Bank supplied the food donated outside Van Nuys City Hall. Its president, Michael Flood, said such giveaways were becoming an increasingly important way to help feed people in need, with “one or two a day” being held in different locations in Los Angeles County.

“This food saves me money because my little income goes to my rent,” said Daniel Jimenez, 40, an independent contractor for golf tournaments whose young children joined him to pick up food.

“I haven’t been working for three weeks. I have a little money saved but I’m paying rent, gas, and cellphone bills. I don’t even know when we’re going back to work,” he said.

As he spoke, volunteers shouted constant reminders to those who walked up to maintain social distancing.

“For a lot of people, they are new to the situation of needing help and not knowing where to turn,” Flood said, noting many people were now suddenly filing for unemployment and government food assistance programs.

“But that may take some time for them to get those benefits. We want to do what we can to get food in the hands of families, just so they can eat,” he said.

A woman carries fresh food in the rain at a Los Angeles Regional Food Bank giveaway of 2,000 boxes of groceries, as the spread of the coronavirus disease (COVID-19) continues, in Los Angeles, California, U.S., April 9, 2020. REUTERS/Lucy Nicholson