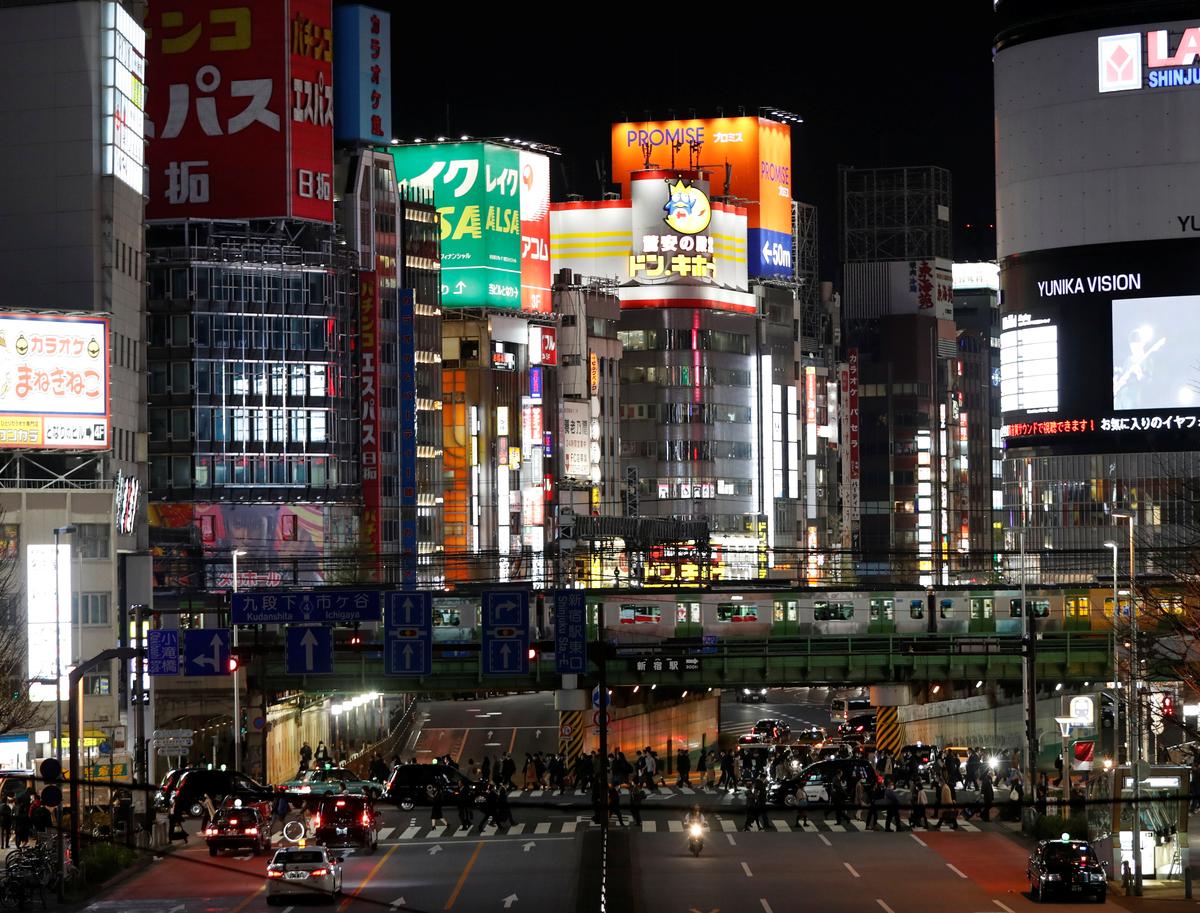 TOKYO (Reuters) – Metropolitan Tokyo asked some businesses to close and the ancient capital of Kyoto warned tourists to stay away as Japan battles a fast-spreading outbreak of the new coronavirus, amid fears the government’s measures are too little and too late.

Less than usual passersby cross a street after the government announced the state of emergency for the capital following the coronavirus disease (COVID-19) outbreak at Shinjuku district in Tokyo, Japan April 8, 2020.

Tokyo Governor Yuriko Koike said she was targetting a range of businesses for shutdowns from Saturday during a month-long emergency through May 6, after resolving a feud with Prime Minister Shinzo Abe’s team over the extent of the closures.

Koike had wanted to move sooner but Abe has resisted measures likely to put greater pressure on an economy which is already tipped to fall into recession, fueling concerns that the central government is putting business ahead of people’s lives.

“This will be tough on residents but if we act swiftly, the pain will be short and the outbreak contained quickly,” Koike told a task force meeting on Friday.

Businesses including pachinko parlours and internet cafes are being asked to close and restaurants to shorten their hours. Department stores, home-furnishing centres and barber shops will be exempted, in a concession to the central government.

Abe declared an emergency on Tuesday for Tokyo and six other prefectures but the details and timing of how life would change in the capital were thrashed out in tense inter-governmental talks.

“I thought governors would get authority akin to a CEO but … I feel more like a middle manager,” Koike told reporters in a sign of frustration over central government pressure.

Abe’s move came after a jump in coronavirus cases in Tokyo sparked concern that Japan was headed for the sort of explosive outbreak seen in many other countries.

The number of cases in Japan rose to 5,548 on Thursday, with 108 deaths, NHK said. Tokyo accounted for 1,519 cases, heightening concerns about sluggish action.

The governor of Aichi in Japan’s industrial heartland, which hosts Toyota Motor Corp, declared its own state of emergency on Friday and has asked to be added to the government’s targeted regions. Gifu in central Japan was also poised to issue an emergency declaration and at least one other prefecture was set to do the same, media said.

The governor of Kyoto prefecture and the mayor of the ancient capital also asked to be included in the national emergency, and urged tourists to stay away from the city’s famous palaces, temples and gardens.

“I call on all people who love Kyoto and tourists from all over the world – until this situation is ended, to protect yourself and your families, please refrain from visiting Kyoto,” Mayor Daisaku Kadokawa told a news conference.

Critics say the Abe government’s cautious approach to business closures will undermine his goal to cut person-to-person contact by 80% to slow the spread of the pathogen.

SoftBank Group CEO Masayoshi Son took to twitter to query the government’s handling of the outbreak.

“Why has Japan put its economy minister in charge?” he asked, comparing the Japanese government’s response to the leadership of Antoni Fauci, director of the National Institute of Allergy and Infections Diseases in the United States.

Tokyo Governor Koike had warned in March that the capital could face a full “lockdown” if infections surged, although Japanese law does not mandate penalties for residents who refuse to stay home or businesses that stay open.

Koike also said that businesses that met her requests to close would receive between 500,000 yen ($4,595) and 1 million yen from a fund set up by the metropolitan government.

Abe has rejected calls to compensate such businesses from the central government’s purse.

The new coronavirus has pushed 51 Japanese companies into bankruptcy with a spike in new cases seen in April, Tokyo Shoko Research said on Friday.