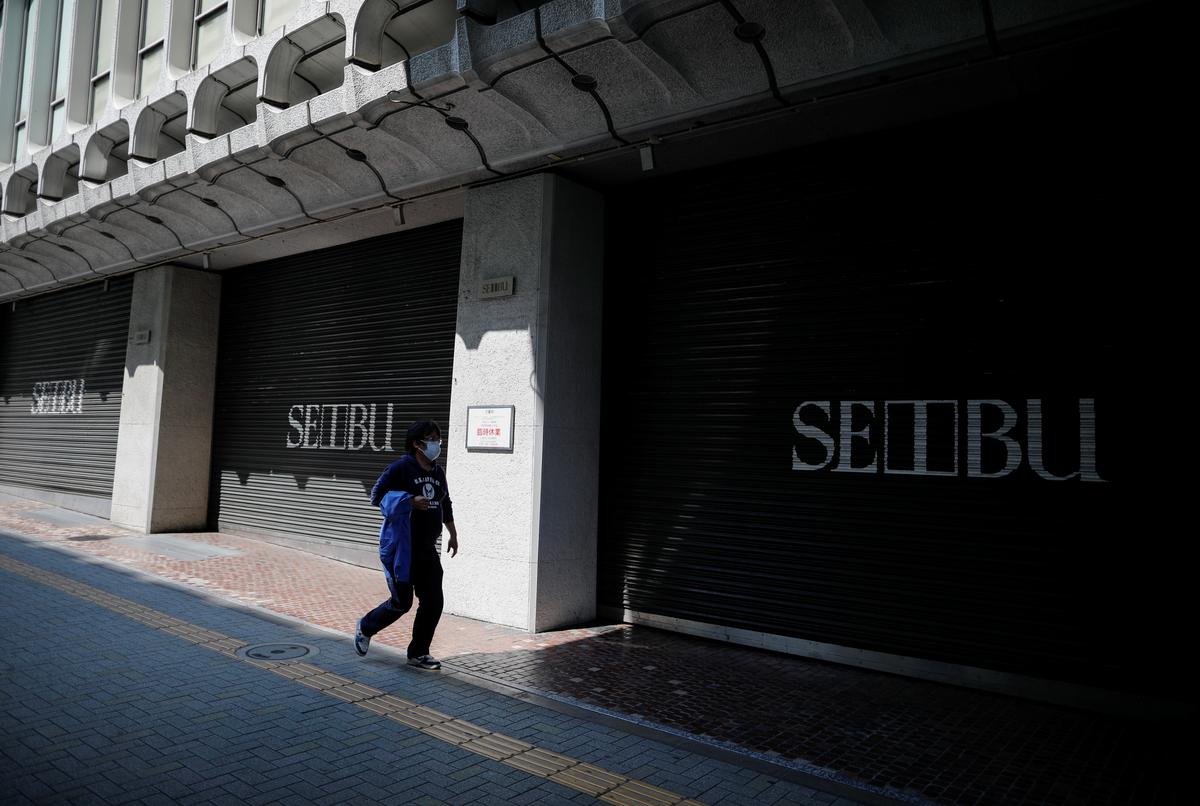 TOKYO (Reuters) – Commuters heading to work packed into trains in the Japanese capital on Wednesday, the first day of a state of emergency aimed at containing the coronavirus outbreak, with some expressing confusion over how best to restrict their movements.

A passerby wearing a protective face mask, following an outbreak of the coronavirus disease (COVID-19), walks past in front of temporary closed Seibu department store after the government announced the state of emergency for the capital following the disease outbreak in Tokyo, Japan April 8, 2020. REUTERS/Issei Kato

The scenes across central Tokyo contrasted with deserted streets and tough lockdowns elsewhere in the world because authorities have no penalties, in most cases, with which to enforce calls for people to stay home and businesses to shut.

“It’s unavoidable that people have to come out for work,” said Risa Tanaka, an office worker wearing a mask near the Shinjuku station, who said she usually tried to work at home, but had stepped out to deliver some documents.

“I don’t know if the emergency declaration is enough, but … the important thing for us to do is to keep a distance from other people, wash our hands and not spread the virus around by coughing.”

Japan, with a tally of 4,472 infections and 80 deaths, has escaped an explosive spread of the virus, but a steady surge in some areas prompted Prime Minister Shinzo Abe to declare the emergency in Tokyo, Osaka and five other hard-hit prefectures.

The month-long state of emergency gives regional governors more power to press businesses to close, but will add to pains the virus has inflicted on the world’s third-largest economy from supply chain disruptions and travel bans.

At major hubs such as Shinjuku, Shibuya and Tokyo in the capital, many commuters not equipped to work from home stuck to business as usual, though trains and streets were less crowded than a week ago.

“We’ve reduced the number of in-office workers by half, but we are still rotating to go into work,” said a commuter, Chihiro Kakegawa, an employee of a financial institution near the Tokyo station, adding that it freed her from going into work everyday.

With Tokyo’s governor Yuriko Koike expected to announce only on Friday what categories of businesses will have to shut, many shops and businesses have been left to decide on their own for now.

Department stores, karaoke parlours and other non-essential businesses including some, such as coffee chain Starbucks, have already said they would close for the time being.

Train schedules of the East Japan Railway Co, which services the capital and surrounding areas, remain unchanged, with operations running as normal.

With more than 80 new cases reported on Tuesday, infections in Tokyo have doubled to about 1,200 in the last five days, or about a quarter of public broadcaster NHK’s national tally.

With an eye on the economy, Abe has sought a cut of 70% to 80% in contacts among people in the seven regions, leaving plenty of wiggle room for defiance of the request to stay home.

“I try not to take crowded trains,” said a Tokyo businessman, who gave only his family name of Sato. “I have my mask on and keep my distance from others.”